On Feb. 10, 2004, hip-hop was introduced to Kanye West, the rapper, with his debut album College Dropout. The singles from this album were soulful and awe-inspiring. The execution of the roll out was near-perfect, and Kanye crafted a well-rounded debut body of work that at the time was the total contrast to the street anthems that were being pumped out over the radio. Even the album cover became iconic. Even though he'd already become a successful producer for Roc-A-Fella, his true passion was getting a record deal as a rap artist. 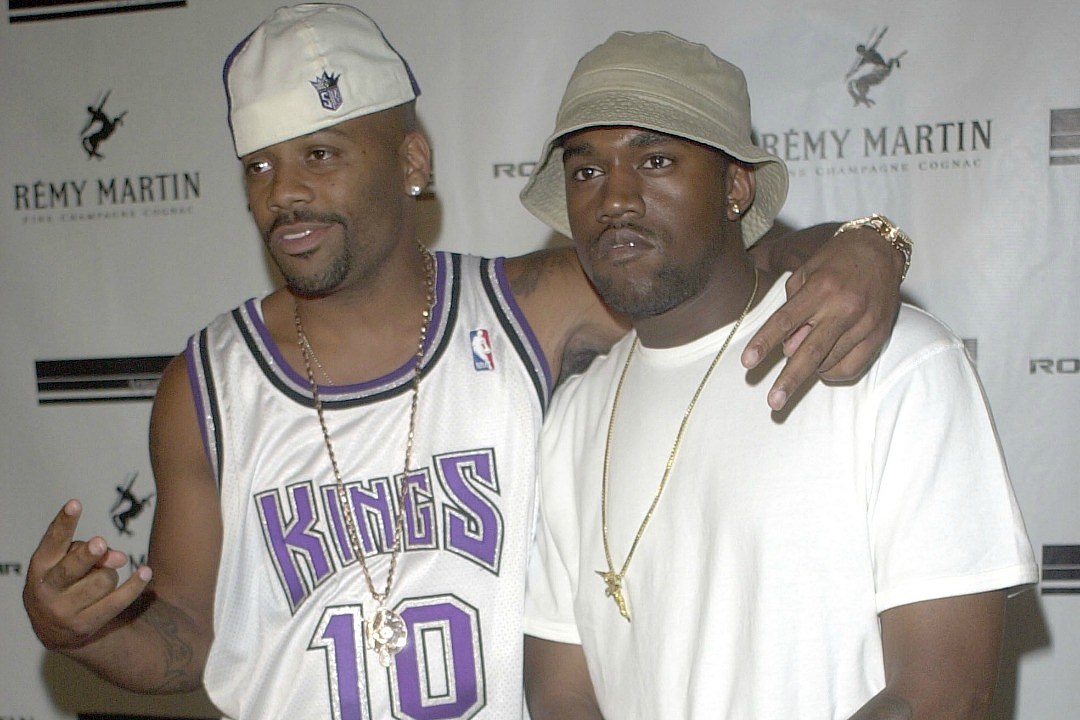 The notion of things happening for a reason or a bigger plan can be very hard to see; when Kanye suffered a near-fatal car accident that resulted in a shattered jaw in 2002, it was hard to see it as anything other than a disappointment in a promising career. But the accident that could have derailed his whole dream of being a rapper wound up catapulting it instead, as "Through The Wire" established Yeezy as a formidable force. You felt every syllable spat out over the smooth soothing sample of Chaka Khan's 1985 single "Through The Fire" as he told of his long road to becoming a rapper. Ten years later this album now stands in the same class as classic debuts such as Reasonable Doubt, Illmatic, and Ready To Die.

A man that was an integral part of the battle to introduce the world to Kanye was Roc-A-Fella head honcho Dame Dash. At the height of the Roc-A-Fella era, Dame was one of the central figures who directed the ship, with theHarlem native positioned as one of the most powerful men in hip-hop. It was Dame who saw something in Kanye’s work ethic that made him want to fight to get him that platform. At Dame’s art gallery in the Lower East Side of New York City, XXL caught up with him to talk College Dropout, the glory days of the Roc and the growth of Kanye West. —Emmanuel C.M. (@ECM_LP)

XXL: When did you first meet Kanye?
Dame Dash: My first experiences with his music was Hip-Hop playing me his beats and beats from Just Blaze and me saying those shits were hot and that I was going to give them to Beans [Beanie Sigel]. That’s my first interaction with Kanye. I don’t remember my first time meeting him. He became noticed after a while because of his effort and consistency. When I first met him he was a square. So he proved by what he’s done that he’s not a square. He had to make me a believer. So my first impression of him was as a nerd and he had to convince me that he wasn’t.

But right now how I feel about Kanye is completely different to back then when I first met him, 'cause he hadn’t accomplish nothing yet. I knew what he could do, but a lot of people I meet—you know how many “could be’s” I meet? All the time. You have this platform, especially back then, it's really what you do with it. You could be talented and don’t do shit or get too cocky or the minute you get a check you slow down or your insecurities make you overcompensate where it fucking hinders your evolution. It happens every day. The question that should be asked is how many that could have been stars shot themselves in the ass. He’s just one of those guys that did not shoot themselves in the ass.

When he told you he wanted to become a rapper how did you initially feel?
I wasn’t paying him no mind at the beginning, none at all. What made me pay attention is when he broke his jaw and he still asked us to send him a drum machine. And then Kareem "Biggs" Burke was telling me what he was doing. See, my thing is, I teach you how to get the money. So if you noticed, people coming around me ended up becoming rich. I give them a formula and they run with it and that’s what they supposed to do. He applied that formula well. And that’s to put a record out every year in the fourth quarter and tour.

When you heard College Dropout, what was your reaction?
I didn’t hear the beginning stages of it; I heard it when it was done. By the time it got to me, I was already putting a record out with him regardless because I wanted to put out as many records as possible. It was around the time we was selling Roc-A-Fella. So I was going to put out a record with all his beats and just put everyone else that was on Roc-A-Fella as a compilation. He brought over the Jamie Foxx record to me at the Bel Air Hotel, and I didn’t get that either. I was like, "Why are you making records with Jamie Fox? He’s a actor." The perspective he sees things from is different from the perspective I see things from because my authentic experience of survival is different then his. He was from the same kind of place but the way he approached it was different than the way I would. He sees things that I don’t see. Just like I’m going to see things he doesn’t see. We’re two different people. I trusted that perspective.

What was general reaction from people?
He’s shock value. That's what he does, he shocks you. He says what most people don’t. He told Bush that he doesn’t like black people in front of everybody. And then he jumped on stage with Taylor Swift—you have got to have no fear to do that. You don’t do that. People love arrogance; trust me, I know. People hate it because they're afraid to do it and that’s what arrogant people love, for you to hate them for being arrogant. I know I do.

Was College Dropout your standout record?
College Dropout—I’m mad I don’t have any parts of that right now. That shit was art. It was authentic and it was real and it was based off his experiences. Regardless, the best album is always the first one because your haven’t achieved the goals. You still talking about what you going to get when it happens; you still got that hunger in you. And that was that album. Like Nas' first album. Like Biggie's first album. Like Jay's first album. Like Doggystle. Those first albums were fucking insane. It doesn’t get any better than those first albums. His issues are different now than back then. You think back then that he’s complaining about not being accepted in fashion? His beefs were different.

Did you see this album being this big?
Yeah, I think everything I do is going to be big. You talking to Dame Dash. You can’t even tell me I’m not a billionaire. I know I’m a billionaire. Whether I have it or not I’m going to get it, I know it. I’m very cocky and arrogant about it. I always knew he was going to be big. Everybody thought I was nuts when I said I had the greatest of all time, I announced it. I said to the world that Kanye is the illest. I said that about Jay Z as well. So when people asked me ten years later, am I surprised? All I can really say is I told you so.

"We’ll see what Kanye is made of by the kind of father he is. That’s how you can really tell how happy a man is, is how he celebrates his children.”

Why did you guys pick "Through The Wire" as the first single?
Because he wanted it first. I don’t get involved in none of that shit. My genius is you let an artist be an artist. That was the genius of Roc-A-Fella, no filter. Of course there has to be a rollout. But I wanted him to do more creative things. I was happy about it as long as he wasn’t being disrespectful to me. My thing is this; at Roc-A-Fella my job was to always make each other rich, that’s all I was concerned about. That is the art that I liked to see.

That’s why I fuck with Kanye, 'cause he worked hard. I’m never going to let anybody out-hustle me; he'd give me an idea and if he believed it was going to work, then I'd fight to make it happen. He wanted to do three videos; I fought my partners to make that happen. That’s my job, to fight for a creator. I had no interest in telling him what to do creatively. I just was getting his timing together. This record wouldn’t be so big if Kanye hadn’t done 10 other records and still be relevant as he is now. That’s where the legacy is.

Looking back now, ten years later, do you feel like, "I told you so"?
Yeah, didn’t I say it? Rewind back to what I was saying about him and how I was supporting him back then and it equals what is happening now except I don’t make no money off it. I never gave a fuck about what anyone thought. It doesn’t matter if people like you or not. They pay to hate you. All that matters is that they talking about you and the product is good. He’s good. He’s a great producer, he’s a great rapper and he’s a great performer. And he has stamina and he’s consistent. The DNA is greatness.

How does College Dropout stack up in Kanye’s catalogue?
It’s the best one hands down. None are close to me. But of course, I had a part in putting it out. That’s my child. You telling me about one of my babies.

You happy about his growth?
I’m happy if he’s happy, that’s all that matters. If he’s having fun every day and loving his life and all his dreams are coming true. If he’s enjoying being a father; really, we’ll see what Kanye is made of by the kind of father he is. That’s how you can really tell how happy a man is, is how he celebrates his children. So that’s a personal thing so you may never see that. But all that counts is how he raises his daughter. And how good his daughter gets raised that’s all that matters.

In the video for "Through The Wire," Kanye gets his Roc-A-Fella chain.
Shit was my chain; I wanted it back. He was supposed to give it back because I had my canary diamonds in it. Actually I want my chain back, Kanye. [Laughs] But, I live my dreams. I made the best and biggest rap stars of all time. I took a chain off my neck and put it on someone who is influential to pop culture. And my daughter who’s 14 right now, can know that her father is that cool guy.