Without some dope shit.

My bad on not posting in a good minute. I was out enjoying the holidays, relaxing, winding down for the year, avoiding my computer, getting fresh air grindin'.

As 2007 was drawing to a close I honestly couldn't figure what I wanted to blog write about or if I wanted to do it at all. I'm not trying to rag on anybody, but, I really didn't feel like cranking out any "year end" or "top" lists. Mainly because I knew I was going to leave alot of shit out, I can barely remember what came out earlier this year. I thought it would be cool to do a "top ten new artists to look for in 2008" type list, but, then I came to my senses and figured that no one would give a damn about anything like that. Then, on New Years Eve, right when I was going to buckle down and just make a "top ten albums/artists you completely ignored" type list, I fucked around and saw some of BET's Notorized: Top 100 Videos of 2007 show. Breifly watching that show proved two things: 1.) Quality-wise, there were no Top 100 Videos, they just showed 100 videos that happened to come out last year and 2.) End-of-year lists are corny at the end of the day, no matter how creative you think you are.

Then on top of that, I figured that no one was going to be in front of their computers checking for or writing blogs as the year drew to a close. Boy was I wrong.

But fugg it, I'm back at my computer now (the applause and middle fingers are mutual my friends).

If you've been peeping Black Ice for a while now, you'd know that for every criticism I make, I attempt to offer an alternative, a solution of sorts. So, that's what I'm going to start the new year with...alternatives and solutions. 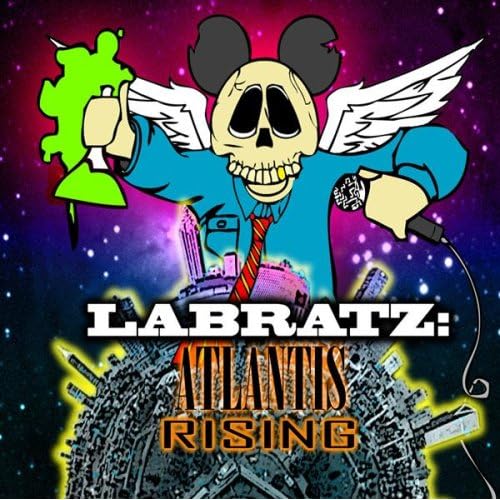 I came across a new group not to long ago. They go by the name Labratz. As usual, when I try to tell some (by no means all) of my music journalist collegues about new dope shit, they turn the other way in favor of whoever they consider to be the new it person, i.e. fresh major label signee who is guaranteed to pop up on TV and radio.

Anyways, I heard about the group from a friend. He told me that they were a new four-man group from Atlanta...DECATUR! specifically. Now, you must understand, whenever I hear that a group is from my side of town, I have to be intrigued and almost always feel the urge to support. In case you don't know, rappers from Decatur are like the bastard children of the Atlanta rap scene. They never seem to get their props or shine, regardless of if the music is super dope or just aight, it always seems to kinda get overshadowed by the music coming from the Westside (T.I., the umpteen Bankhead rappers) or the Southside (Dungeon Family and damn near everyone else).

Eastiside cats either get outshined (Ghetto Mafia, Youngbloodz), set back (Gucci Mane, Baby D), not given a fuck about (the Eastide Boys), break up (Crime Mob) or simply never come out (Young Noah, [and lets hope not] B.O.B.)

The same can pretty much be said about Da Backwudz. They came out when Atlanta was busy snappin-n-trappin. They got compared to Outkast (which can be a gift and curse). The album got pushed back more than Dogg Food. They wound up releasing a single and video that kinda painted the wrong picture of them. They rapped just a little too good, for their own good and they had an album that featured George Clinton, Killer Mike and Sade. Niggas ought to know better than that! You're only supposed to have whoever the hottest sanga or rappa is at the time on your shit.

Anyways, when I went to the Labratz myspace page, a couple of the voices sounded familiar. After a few listens, I realized that it was actually Da Backwudz with two new members and Sol Messiah (google him) as their in-house producer. I saw that their album was on sale on the net and decided to purchase it. I was not disappointed.

So far, everybody that I've put up on this album has gone ahead and bought it, which must mean that its pretty damn good, because as most of us know, alot of us don't buy shit anymore.

I don't want to bore you all with my personal thoughts on the album (shit is dope!). This wasn't supposed to be a music review anyway. I'm just simply doing my part (and job) as a music writer to help expose the underexposed dope shit instead of just rag on what's out or what's force fed to me. That's too too easy.

Oh yeah, for all of you YouTube junkies, Labratz just posted a new video for their single "Creation." Check it out, I think you'll appreciate it.