Hustle & Motivate2 Chainz’s latest album, Dope Don’t Sell Itself, might be the end of his trap album resume, but with several business ventures in his portfolio including multiple restaurants, a nail shop, and a California weed dispensary, Tity Boi’s hustler’s spirit is alive and well.

It’s a chilly Friday night in late February, and 2 Chainz is getting a mani-pedi in Pamper Nail Studio, one of his many business ventures in the brick building-lined Castleberry Hill neighborhood near downtown Atlanta. The 44-year-old rapper's flagship restaurant, Escobar Restaurant and Tapas, is located two buildings down and currently filled with night-lifers.

Born Tauheed Epps, 2 Chainz’s decorated 25-year career as a member of the duo Playaz Circle and as a solo artist includes two platinum albums, a dozen platinum singles, a 2017 Grammy Award for Best Rap Performance and countless hip-hop quotables. He’s a record label owner, with artists like Skooly and Sleepy Rose signed to T.R.U. (The Real University). His seventh major label solo album, Dope Don’t Sell Itself, dropped last month, with a deluxe version coming out in late March that has additional songs, including a track with Justin Bieber. The sequel to Chainz’s ColleGrove album with Lil Wayne is complete and on the way, as well as an LP entirely produced by Statik Selektah. Busy is an understatement.

To last this long in the fickle music industry, it takes adaptability. 2 Chainz seems to have mastered that skill. To last this long outside the rap game, it takes a different type of drive. In his case, that means his hustle never stops. The business-savvy rhymer cut the ribbon on his first Escobar Restaurant and Tapas in 2016, and opened a second spot three years later in the Southside Atlanta suburb of Morrow, Ga. Pamper Nail Studio opened its doors in March of 2020, while he expanded with Esco Seafood in the Sweet Auburn district of Atlanta that December and is planning on launching Esco Pizza soon. He also has a minor stake in an NBA G-League team and is a partial owner of a Los Angeles dispensary. Tity Boi wants a big amount and he’s activating his experience as a trapper and a rapper to achieve entrepreneurial success.

Check out 2 Chainz’s XXL magazine digital cover interview in which he talks about his Dope Don’t Sell Itself album and deluxe, attaining entrepreneurial prosperity, how being in the streets made him a better CEO and more.

XXL: You previously said Dope Don’t Sell Itself would be your last trap album. What made you make that decision?

2 Chainz: The decision was based off me knowing I had more to offer to the game and also being smart enough to know what my fans want from me. It’s all about growth and maturation. I’ve offered that each album. Just moving on passed Dope Don’t Sell Itself, you got CollegeGrove 2 with me and Lil Wayne and I already know what that sounds like. I still do trap music, but I’m not putting all of my eggs in one basket.

What was your mission with dropping Dope Don’t Sell Itself?

Connect or reconnect with the youth. This is a youth-driven sport. Voices for me are like instruments. Some of these instruments, they have never been together in the same place before. Me and Lil Baby. Me and Roddy [Ricch]. Stove God [Cooks]. Jacquees. Moneybagg Yo, BeatKing. A lot of these songs, they just felt good. It was good hearing us for the first time together.

You also worked with YoungBoy Never Broke Again on the project.

The song “10 Bracelets” that’s on my album now was a song we did one day at [my] spot [in California]. Buddah Bless came over, who produced it. Pulled up the beat. That was another in-studio [recording session]. ’Cause a lot of times these days we text and email [verses]. With the YoungBoy song, and a lot of the me and Wayne album, we were in there together. It’s always cool to get in and vibe with people.

On the DDSI track “Outstanding” you said, “You can’t buy motivation.” Where did your motivation come from?

One of the things that motivates me is me not believing in a glass ceiling. Two: not being content at where I am in life and the things that I have. And three: straight up wanting more. I want bigger everything. More of everything. That’s where that ambition come from. I’m not a trust fund baby. No one died and left me with no money when I turned 18. I literally had $50 one day. And I never went under $50 after I got that $50. That’s a real American dream.

Now I’m trying to make $50 million. It wasn’t no DVD I watched. It wasn’t no YouTube fucking shit I paid for and went to, and some nigga told me how to fucking get rich. I figured it out.

“It wasn’t no YouTube f!$king s%@t I paid for and went to, and some nigga told me how to f!$king get rich. I figured it out.”

The deluxe version is coming out later this month. How many news songs will be on the project?

Any more details about the additional tracks on the deluxe?

Me and [Justin] Bieber got one together. That shit gon’ go crazy.

Do you see yourself ever putting the mic down and playing more of a CEO role?

You tapped into entrepreneurship years ago. What inspired you to start being your own boss?

My daddy sold bricks and he sold weed. My mama’s mama, she was a bootleg lady. My mama was into real estate when I was young. My daddy never had a job. I never remember him getting up early. I never remember him complaining about being in traffic from coming home late from work. I don’t remember none of that. I remember Cadillacs and I remember my uncle having plenty of jewelry.

I had an uncle who owned a liquor store. He employed all of my uncles. A lot of that stuff was just stuff that I was subconsciously peeping out. Like, how to do it by yourself. I’m a hustler as well. So, I know that just rap money wasn’t gon’ do it for me. I had to try to find multiple streams of income. Just try to diversify my portfolio.

How would you describe the experience of being a restaurant owner? It has to be different than your experience as a hustler.

“The trap is really implemented in a lot of different businesses in the world.”

How did the idea to create a nail studio come about?

The reason I invested into this business is because I’m into self-care. And I wanted a place of my own to get that done. And I had a space for it. And this street, I felt like with the employees I have next door, which are 85 percent women, maybe even 90 percent women, that I could have something close that stays open late that can help out people in the neighborhood.

Black-owned nail salons are kind of rare in most areas. How important for you was it to show that we can own the establishments that we often spend our money with?

Black-owned anything in Atlanta is not rare. It’s probably a Black-owned sushi bar in Atlanta. We do everything here. And a lot of Black people have put things together where they can show some type of ownership. This really is land of the free. Land of the hope down here.

Do you think being in the streets helped you at all when it comes to being a legal business owner and CEO?

I have a dispensary. I’m the second-largest shareholder in Pineapple Express on Hollywood and Vine in California. People have strains, which is cool. I’ve had a strain before and I bust my ass for the strain. And I didn’t make no real money. Not to me. Not somebody that’s getting some money.

When did you decide to get into that?

When the opportunity came. Some people don’t hear that door when opportunity be knocking. I leave my door open. Unlocked. Window up. Opportunity come down my street, I’m getting in there.

Why do you feel it’s important to keep your hand in so many pots?

I don’t think it’s smart to just do one thing. You gotta figure out other ways of bringing in income. For me, passive income is very important. That’s why I own restaurants, spas, and stuff like that, too. It’s cool to have other income coming in, but I like to get paid weekly, too.

Do you have any new business ventures in the works?

I have a lot of business opportunities. I’m so blessed I don’t even know what to say. Over 15 business opportunities right now. I do have a deal with Krystal’s where I’m basically in charge of making it a more credible name again. I’m about to make it cool again. I like to call it, add some Toni to the menu.

Krystal’s is a fast-food restaurant. So, [for] people up north, I think White Castle is what it’s compared to. They serve small square hamburgers, and they open 24 hours. It was something I ate when I was young. And the owner of Krystal’s is actually from Georgia. So, we meshed very quickly. We built a good rapport, and we did business together.

What’s one word you’d use to describe yourself as a businessman and why?

I would like to think I’m a smart businessman. But also, you got to put some type of luck in there. Nobody know if this stuff is gon’ [work]. I don’t know. I came up with a restaurant. Now we are about to start franchising. Now, we ’bout to open up Esco Pizza. You talking about someone who internally franchised a restaurant in the last five years, and opened up four of them, during the pandemic. And now I’m about to start selling that. Selling that blueprint, that whole design. And I’ma get paid off of it, monthly. Which is another example of passive income.

Do you see yourself as an inspiration to people in the community?

Yeah, I hope that I’m inspiring people just by my actions. I don’t want to be too preachy. That’s not my angle, because I know where I came from, and you don’t want to be trying to be preachy and somebody pull up a receipt of you being what you tell them not to be. I believe God got something for you. And if you can stay out of jail and the graveyard, you can make it. You can figure it out.

What do you feel like you are the best at, at this point in your career?

I think I’m good as hell at being me. For real, I don’t change. I just had dinner with some billionaires. Guess what I told ’em at the table? I’m [supposed] to be here. You supposed to be next to billionaires eating? Yep. Am I surprised? Nope. At all. I done put in too much work.

So, that’s my angle. Being really, really comfortable in my own skin. Just a tall Black muthafucka. Got some money and good credit. You can’t tell me nothing. Pretty-ass wife. Pretty-ass children. I got some shit going on, man. I can’t wait to come walk in your trap and take over your trap. I do it every time. But I can rap, too, though. Like, real good. Like, juggernaut. 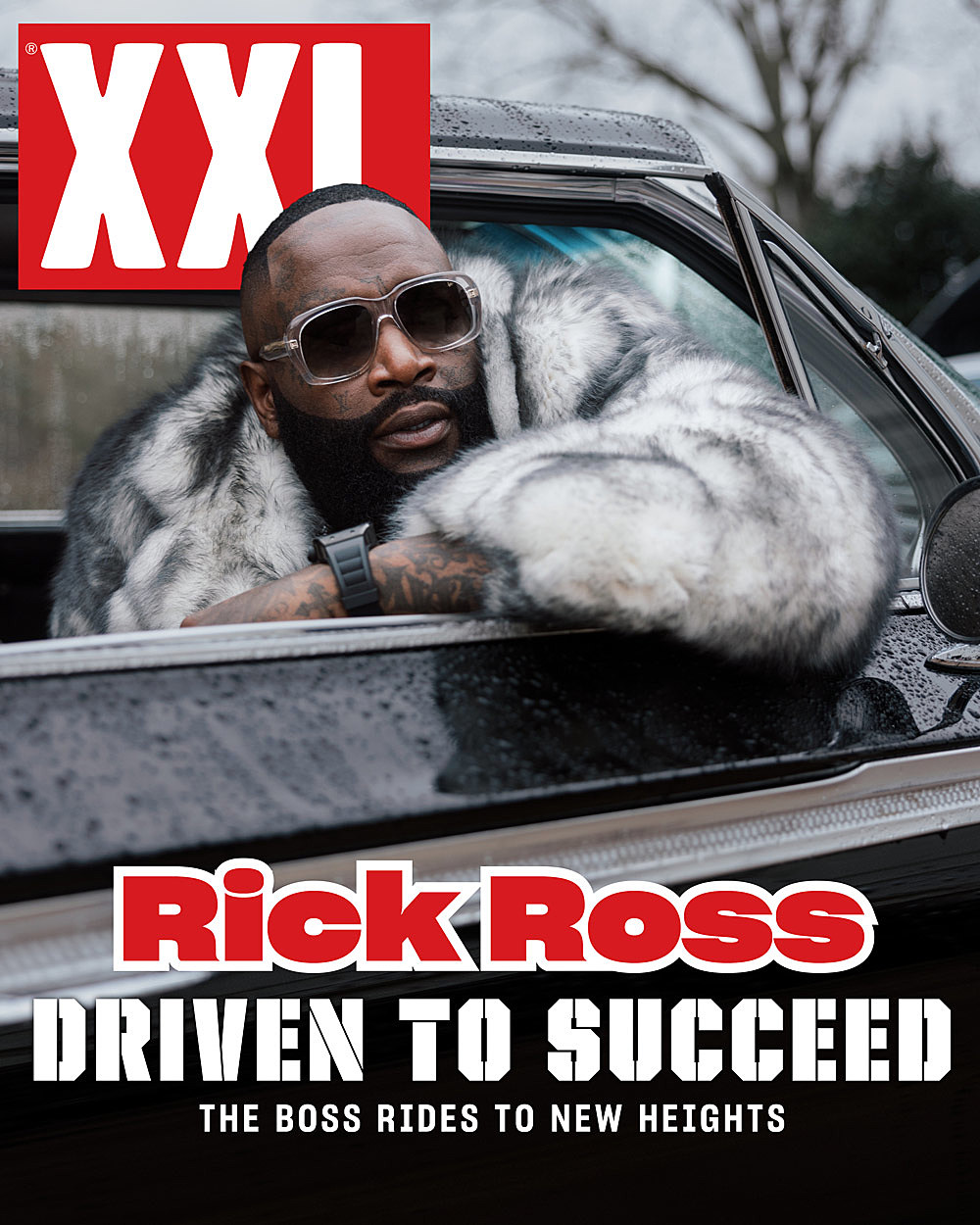