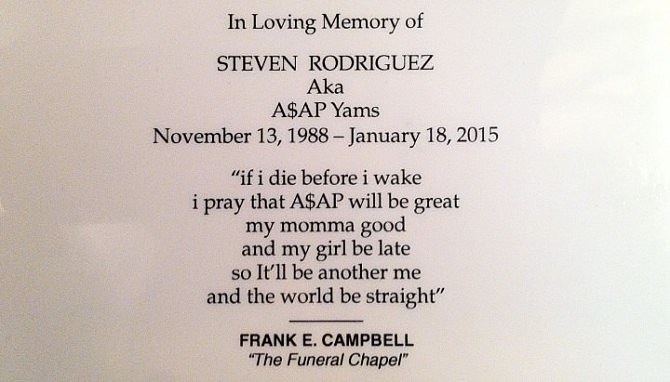 Friends, loved ones and fans celebrated the life of the late Steven Rodriguez, also known as A$AP Yams, Sunday evening (Jan. 25). The memorial service took place at the Frank E. Campbell Funeral Chapel in New York. That's the same place where Aaliyah, Notorious B.I.G., Joan Rivers and many others celebrities were put to rest.

It's been a week since the hip-hop community received the sad news of A$AP Yams' passing. The public portion of his funeral had been announced on Twitter earlier in the weekend. About one hundred people gathered in a room full of flowers and A$AP gear from over the years.

Yams' casket was framed by a Tumblr inspired photo of him riding a white unicorn on one side and an oversized Coogi sweater on the other. Loved ones watched a slide show of photos of Rodriguez on the screen behind. Each guest was given a laminated copy of his photo for his 2013 New York TImes profile on one side, and an epitaph from his Twitter account on the other.

A$AP Rocky once again denied the speculation Yams’ death was caused by an overdose. “People were saying that Yams overdosed on drugs — he didn’t overdose on any drugs,” he said. “I feel like people feel that way because that’s all he’s in pictures doing. When you see A$AP Yams you see Hennessey or purple drink, you see some type of controlled substance or illegal narcotic.”

As previously reported, Yams was found unconscious by his roommate early Sunday (Jan. 18) morning. He was transported to Brookyln’s Woodhull Medical Center where he was later pronounced dead. There were no signs of trauma and a cause of death is pending an autopsy report.